From Chicago to Paris and Cannes: How a 48 Hour Film project became a web series – Interview with Kyle Leland, Author and Director of Hammersmith 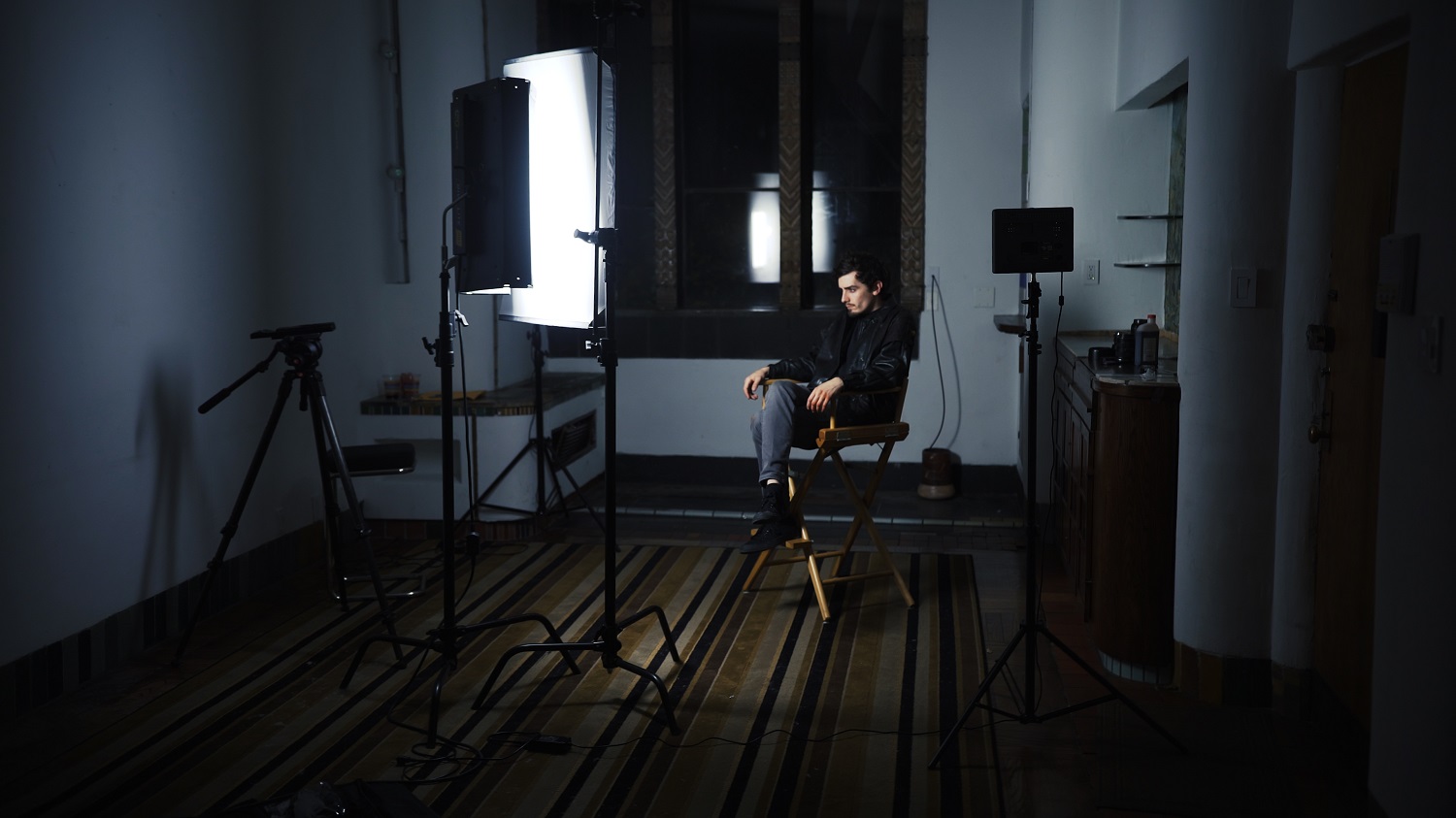 Hammersmith is about the bizarre and sometimes exhausting work on a film, the creator of which stands not only in the way of its employees, but most of all himself. Quite a few claim that there is hardly a job that comes closer to feeling like a dictator. Francis Ford Coppola once compared himself to Hitler, which may be due to the Filipino heat during the filming of Apocalypse Now. Now this comparison would seem overdone, but there is no lack of self-exaggeration concerning the protagonist of Hammersmith: Bayou Straights is writer, director, producer, actor and stuntman at the same time. And he is of course the star of his own production: Ryan Hammersmith. Suffering from their narcissistic boss, the team around him tries to implement his sometimes self-destructive ideas. Despite various decision-making difficulties and accidents at work that hinder the shooting of the second part, Hammersmith 1 is surprisingly nominated at a film festival in Paris. So the show must go on… In this interview Kyle Leland, who was nominated for the Best Screenplay for _Hammersmith _at Seriale 2020 talks about his impressions at film festivals, spontaneous shooting at night on the streets of Paris and his plans for the future. 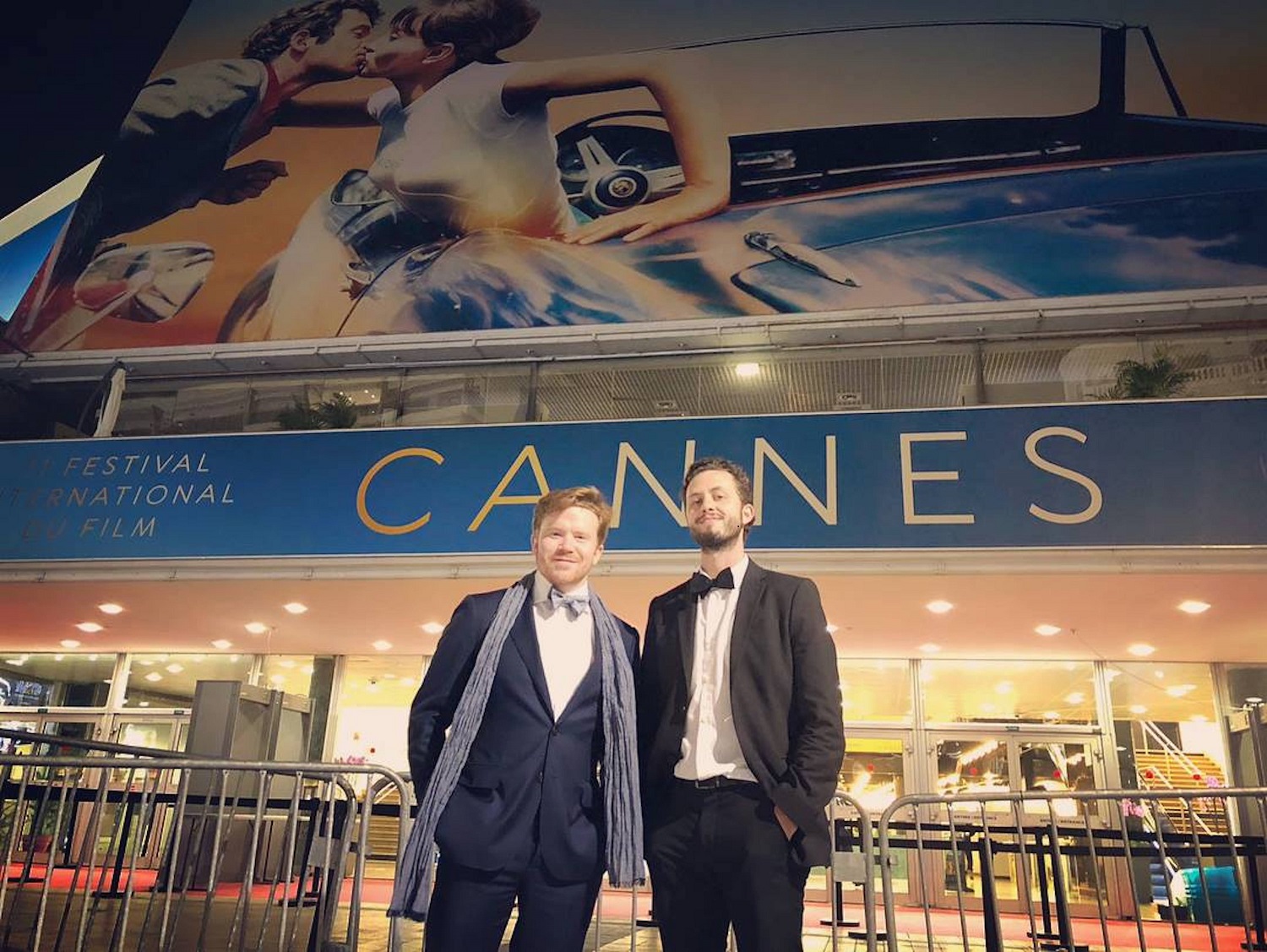 die Seriale: You have passed multiple academies and other institutions where you could collect lots of experiences in film making. After you graduated from the Columbia University in Chicago you were part of the production team in several major movies and TV-shows. You also worked for Paramount Pictures for famous movies among others before you founded Kalopsia Films together with Justin Nico Flocco. As you said once, all those experiences sharpened certain skills and paid the bills, but those projects weren’t the stories you wanted to tell… Was there a specific experience where you became convinced to make web series aside from some jokes you wrote down as a production assistant?

Kyle Leland: No, not really. There is actually a lot of web series made in Chicago and surprisingly there isn’t a good web festival in the city, but I never really thought of making a web series specifically. My goal is to make feature films and I have normally only made short films and that’s how this project started. It was originally a short film that we actually made for the 48 Hours Film Project. But it was so much fun to make because I was friends with the crew and the cast that we just wanted to go on with the story. It just made sense to keep going. So I never thought to make a web series until we already made the first episode.

die Seriale: The first shots from Hammersmith won 7 awards at the 48 Hour Film Project in 2017 and as a result it was nominated at the Filmapalooza Festival in Paris and the Cannes Film Festival in 2018. Was this like a breakthrough for you? Was it expected or unexpected?

Kyle Leland: Like you said I have been working as a production assistant on all this big projects, as a small person on a big crew. And then making kind of smaller scale short films and having the first festival experiences, hearing your name called when you win an award, that definitely is validating. A funny thing was it actually is much more satisfying to hear my cast members names called. Nick Wilson won for Best Actor and that was a lot more rewarding. Like hearing my own name just makes me nervous. It was really awesome to work with an actor and get rewarded for him. But yeah, going to Cannes is every filmmaker’s dream, so that was amazing! 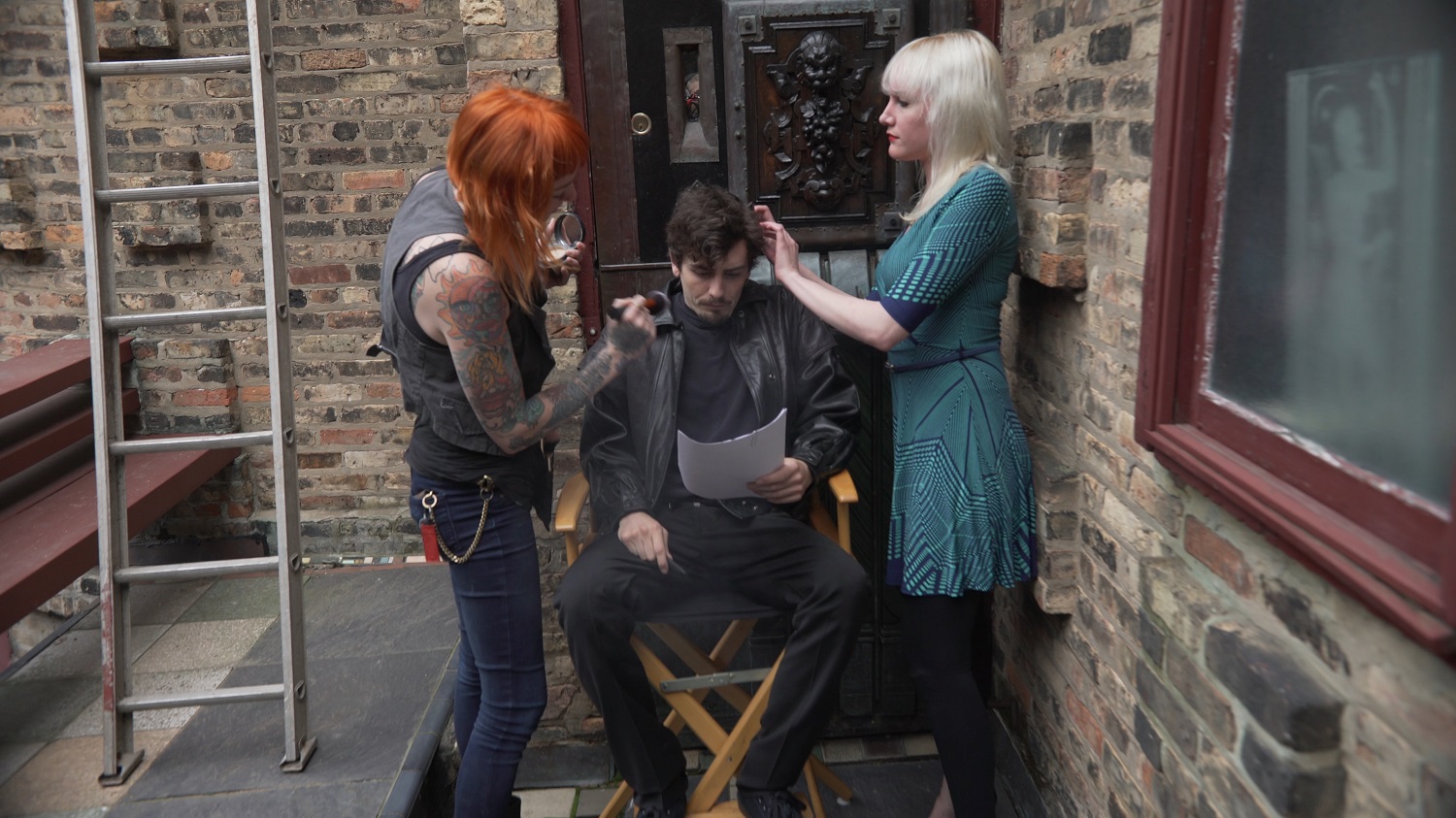 die Seriale: The shots in Paris for the 5th and 6th episode were “the times of your life”. What was the funniest, strangest or most impressive situation?

Kyle Leland: There was like ten of us living in an Airbnb that only had two bedrooms and a bunch of hammocks. We were all sleeping in hammocks like in a little box. It was so much fun. We were in Paris for Filmapalooza and we decided to shoot while we were there. We had the whole cast there and the cameraman and we could easily get a sound guy. We actually shot a scene on the street right outside with a character who’s drunk and mad, drinking champagne out on the streets and whos being really loud. It was a night shot so it was at midnight and I was telling him “it’s pretty late don’t yell too loud!” but he was just screaming. Eventually after a couple of takes the DP tapped me on the shoulder and told me to look up. And I looked up and there was just like every single resident has their head out the window staring at us with the most tired and frustrated look on their face. I just said “pardon, pardon” and we quit the shooting. I am surprised that they weren’t yelling at us more. If that was in Chicago they would have been a lot less polite!

die Seriale: Are there any personal experiences from the film business that you work through with Hammersmith?

Kyle Leland: I think when I was working as a production assistant I kept another idea for a TV Show that was more based around being a production assistant. Being on a film set with hundred people in all these different departments is just a crazy and a weird situation that doesn’t really exist in any other work forms. There are so many occasions for jokes and for these weird situations. As a production assistant I was always writing down ridiculous scenarios that you can get into when you are trying to make a movie. But then this project came specifically from the 48 Hours Film Project. They give you requirements to be sure you made it in 48 hours, so there is a line of dialogue which is “where did you find that?” and you had to have a character, whose name was Ryan Hammersmith, and he was supposed to be a pass control professional, so that’s why in one scene he opens the door pretending to be a pass control professional. We picked two genres we had to choose from, one was action-adventure and the other was mockumentary. We were supposed to choose but I decided to combine them. I really love and started with comedy but I also love action, so it was a great way for me to play with both genres at the same time. Even when it doesn’t take place in an office it’s very influenced by The Office. 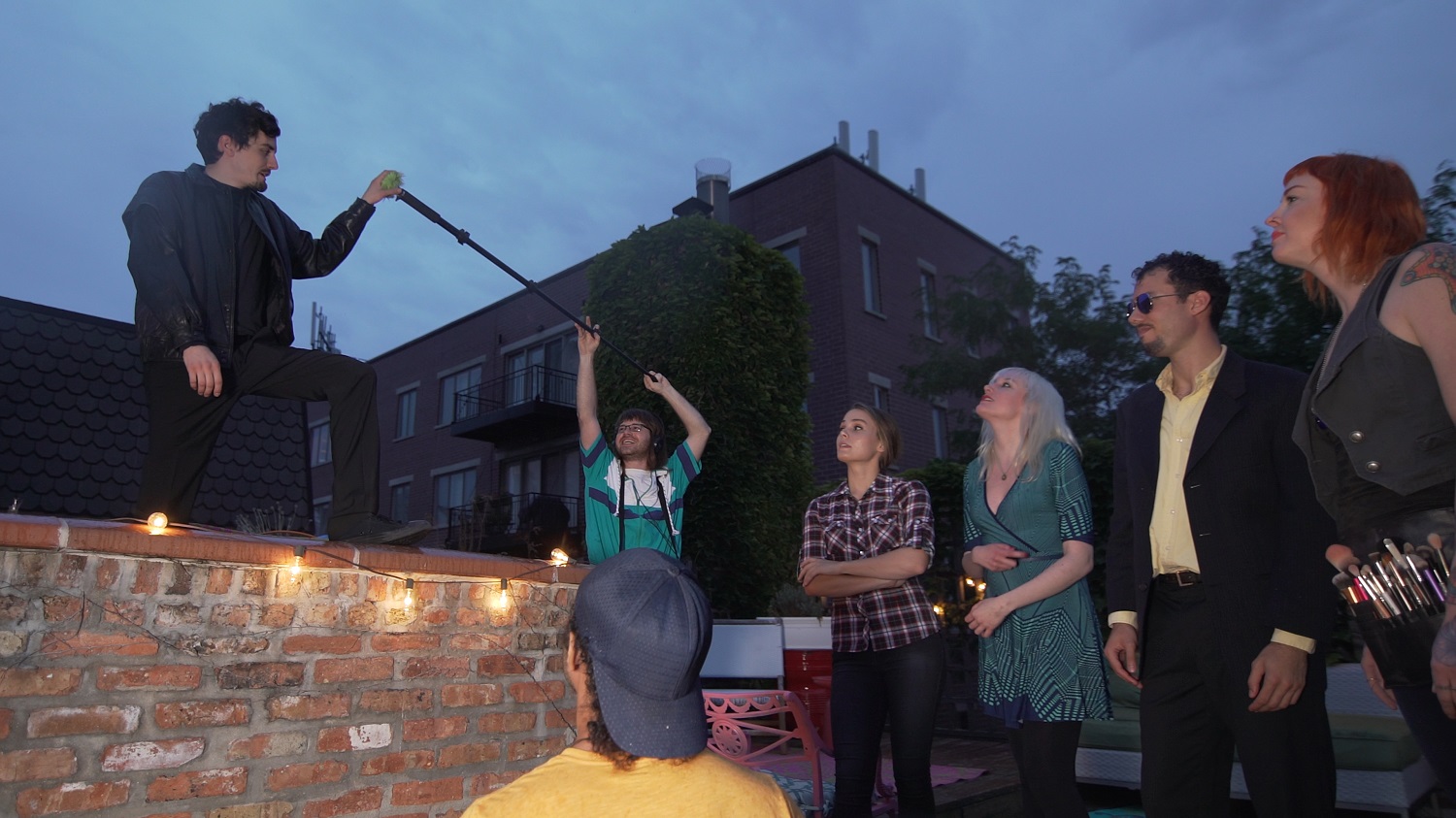 die Seriale: A well known hurdle of web series is of course the monetizing. Is there hope for the planned second and third season of Hammersmith?

Kyle Leland: Some details are in progress already. But it is just a matter of if we get a big audience for once we roll out all six episodes of this first season. If people love it and they want to see more then there is a very good chance we can make more because we are all still friends and we all live near each other. It’s definitely a possibility but if we make this decision it’s another one or two years of work and money. I will hopefully find some App that wants to help produce the next season.

die Seriale: Is there any other project you planned with Kalopsia Films?

Kyle Leland: Actually the other Kalopsia Films co-founder lives in Mexico City right now and is working on a cooking documentary show and also a documentary about immigrants who were deported back to Mexico. I personally have an idea for a full length pilot that I am currently writing with a friend of mine who is in Los Angeles. I am hoping to get that all written now and then maybe just shoot it ourselves.